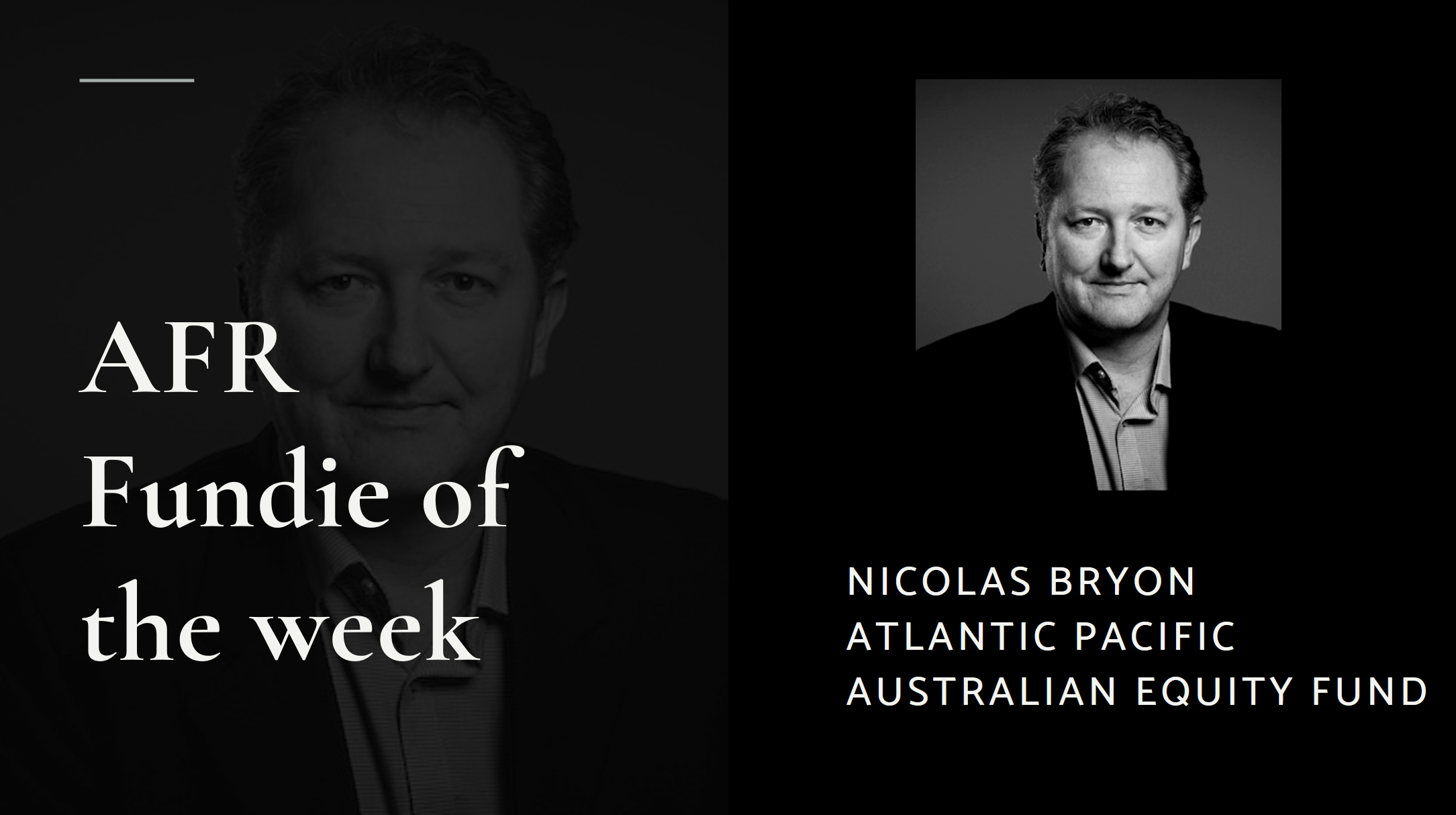 Nicolas Bryon has an unorthodox belief: he actually believes in market timing.

A willingness to rebuff the accepted market wisdom warning about the perils of doing so allowed the fund manager to outshine the “time in the market” crowd with a 17.2 per cent return in March.

Having navigated the volatility that torpedoed the track records of many of the market’s most feted hedge funds, the portfolio manager of the Atlantic Pacific Australian Equity Fund warns there may be more downside as investors confront the “sticker shock” of high unemployment and the fallout on consumer spending.

Bryon’s wariness is founded on his experiences travelling through Asia after the region’s financial crisis of the late 1990s, a massive shock that not only felled a number of economies but triggered a reshaping of societal views on spending and the use of debt.

He sees the prospect of a similar dynamic playing out in the wake of the COVID-19 crisis, which has produced massive job losses as social distancing restrictions have come into force and economies have been placed into hibernation mode.

“When you have people blindsided by COVID-19, not necessarily getting another job for another year, the psyche of those individuals will change,” he says.

“It’s going to be 10 to 15 per cent of the population who thinks that way. There will be the haves and have-nots, not that it’s any different to what we had before, but I think the have-nots are going to have major issues with propensity to spend.”

Bryon, whose fund has around $30 million in funds under management, says he had been expecting a sell-off for about a year given the more than decade-long bull run and the extended valuations of many popular, and richly valued, stocks.

The fund typically has a long bias – but is very rarely at 100 per cent net exposure – but is focused on downside risk management and capital preservation.

The fund, established in 2013, has a track record of outperforming when the market declines more than 2 per cent.

Bryon’s belief in market timing is based on the exposure of stocks to large declines and his desire to avoid “sequencing risk”, or the need for investors to access their funds as they retire.

“To me, given that equities are a high-risk investment vehicle, if I can take those drawdowns out then I will.

“That’s why I have a bias to saying if you can time the market then fantastic.”

He also disagrees with the idea that big sell-offs like that seen in March are Black Swan events, or events that cannot be forecast.

“I just don’t agree with that concept because these things happen quite regularly. You can’t predict it, it’s nothing you can predict, but they happen all the time.”

“If your mentality is that you know these things are going to happen and you have the tools to protect capital when these things do happen, then why wouldn’t you use those tools? That’s what we do.”

That tool is an analytical system he calls HALO, which feeds into what he calls the quadruple alpha process. That’s a combination of fundamental stock analysis, event analysis, an understanding of macroeconomic issues, and quantitative analysis.

“It’s also experience of looking at markets, how to interpret economics, knowing when markets are risky,” Bryon says.

The combination of analysis and experience paid off in March

The key to the fund’s success amid the March maelstrom that drove the S&P/ASX 200 Index down 21.2 per cent was a fully hedged portfolio – that was long stocks, short stocks and short share price index (SPI) futures – and the decision to hedge out risk over the weekends. “This year in particular we’ve closed the book down every weekend because we’ve been expecting something to happen. It’s just erring on the side of caution,” he says.

“It certainly was true through mid-February that the momentum of information coming through about COVID-19 was starting to accelerate,” he says.

“The distinction that was very important to understand very early on was the fact that the US was so behind on testing.” He said the uncertainty of COVID-19 presented amazing trading opportunities given the intra-day volatility in the SPI, the most liquid equity-related instrument. The SPI can be traded from Monday to Saturday morning, during both the day and overnight.

“Amongst this, we’ve got a hedge on, we’re buying low beta stocks, we’re selling COVID stocks like Qantas or Sydney Airport or Cochlear or expensive stocks,” he adds.

“If prices at an individual security level had moved too far we then covered, but we’d always have that hedge on. Because of the speed at which it happened, the actual daily price ranges were astonishing. “To be on the right side nine out of 10 trading days was awesome.” But elevated volatility meant sizing of positions was more restrained than usual.

“There were just awesome opportunities,” he says. “Ordinarily, we’d say we like this stock so we’ll put 4-5 per cent in it. But because of the volatility and because of the speed at which prices are moving, we were only allocating 2 per cent to these stocks.

If his call for a tough market due to high unemployment proves correct, Bryon says the fund would have “very little” long exposure.

“Ultimately we want to be in a position where we can accumulate some beaten-up stocks that we know aren’t going to blow up and in a year’s time, two years time we’ve made 100 per cent, 200 per cent on those stocks.”

The strong absolute and relative performance produced by Bryon contrasts sharply with the deeply negative returns delivered by some of the market’s more prominent hedge fund names.

Bryon, whose aim is to grow the fund to $200 million, says some funds may have grown too large to be nimble. “These guys are losing 50 per cent, 60 per cent. What’s the go?” he adds.

“When you’re in the hedge fund space and you’re touting certain properties and you don’t deliver, I don’t know how these firms are going to be open in a year’s time. They will probably, but they shouldn’t be.”